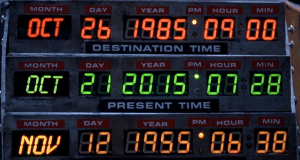 Although I was not precisely in the target audience of the Back to the Future franchise in the 1980s—having been only 3 years old when the first film was released—the movies fittingly transcended their time. I grew up frequently watching a VHS copy that had been taped from TV, and my life has been colored by such things as fervent elementary school debates about whether or not hoverboards were real and endless quotes and references among friends whenever a word like "gigawatts" would come up. Marty McFly's searing rendition of "Johnny B. Goode" even inspired me to pick up the electric guitar.

On a day like this one—October 21, 2015, the date to which the protagonists travel in the second film—it can be a good move for brands to acknowledge that there are lots of people like me. Even if I don't end up buying whatever synergized merchandise or service they are offering, it demonstrates that they are in on the joke and don't take themselves too seriously to have a little fun with the occasion. It also establishes that most crucial element of friendship, which forms bonds between a person and a brand just as it does between two people: they like something I like.

Scores of brands are tweeting using the hashtags #BTTF2015 and #BackToTheFuture, but here's a quick roundup of how a few notable brands have marked the date:

Pepsi released a limited quantity of Pepsi Perfect in retro-futuristic bottles, charging $20.15 a pop. Although this initially generated excitement, there was a fair bit of backlash—not because of the exorbitant price for 17 ounces of soda, but because the 6,500 bottles released were not enough to satisfy demand.

Toyota actually scored Michael J. Fox and Christopher Lloyd for a promotional video for the Toyota Mirai, complete with knowing nods to the original script and "The Power of Love" on the soundtrack. The tie-in (other than that a customized Toyota truck was Marty's dream ride) is that the Mirai indirectly repurposes trash, a la the fictional Mr. Fusion device, to be a source of hydrogen for the electric car's fuel cells.

Lyft is offering lucky Manhattan users a chance for a free ride in a DeLorean if they request a ride between 11 a.m. and 5 p.m. Although winners of this prize will surely be fewer than those who scored a Pepsi Perfect, the element of surprise tempers expectations and makes for a whimsical promo that gets the brand name out there effectively.

Volvo, in one for the "say what?" file, indicated in a cagey press release that they would unveil a "Time Machine" concept at next month's Los Angeles Auto Show. Not of course a true time machine, this design would instead potentially "give significant time back to drivers" through some means as yet unstated. Vague? Sure, but automotive news sources are dutifully reporting the announcement.

Universal Pictures created a cute trailer for Jaws 19, not to promote anything in particular, but seemingly just for fun. And fun it is.

Calvin Klein, which served as Marty's comedy-of-errors pseudonym, took to social media with a supercut of moments from the films.

A name notably absent from the scrum: Mattel, the in-film manufacturer of the hoverboard. Missed opportunity, or sensibly flying under the radar because they haven't yet made countless childhood dreams come true?

Regardless of how well each brand leveraged Back to the Future II day, the phenomenon underlines the potential value of product placement. You never know when a film will become a beloved cultural touchstone and you'll be able to double-dip decades in the future.