Hootsuite, TweetDeck, Buffer and the other Twitter-enhancing tools out there can do a lot to keep your audience engaged, but as with most powerful tools, you can harm yourself with them if you're not careful.

Such appears to be the case with the National Rifle Association, whose handle @NRAblog tweeted the following (since deleted) as news was coming out about the mass shooting at a church in Sutherland Springs, Texas: 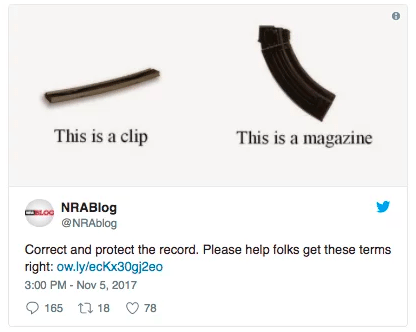 The tweet linked to an article entitled "It’s Time For a Vocabulary Lesson..." which breaks down some commonly misused firearms-related terminology. It was first published in August 2016.

To any professional communicator, it's clear what happened here: @NRAblog had most likely scheduled this tweet, probably as one of several daily scheduled tweets, to link back to old evergreen content and keep driving clicks to its site (an NRA spokesperson could not be reached to confirm this was the case). This was probably not as clear to the account's more than 100,000 followers and the Twittersphere beyond. To them, it looked like callously sharing gun trivia in the midst of yet another gun-related tragedy.

Scheduling tweets and recycling old content are best practices, but what the NRA somehow failed to take into account is that it is an extremely crisis-prone brand: When a shooting happens, the eyes of America immediately focus upon it to hear its response (or its respectful silence). Its crisis plan (we can assume the NRA has a crisis plan, right?) should include the following:

But the button was not touched in time, and the reaction was harsh. Congressman Seth Moulton led a chorus of outraged responses to the tweet:

Thanks, @NRA, for helping us focus on the real issues here, literally minutes after more Americans are massacred. https://t.co/umCqUFouKA

The gun-related crises are obvious and frequent enough that the NRA should know better, but what kind of crisis could get your brand in similar trouble? Brainstorming worst-case scenarios with your team is recommended as you put together a comprehensive crisis plan to avoid reputation damage that should be easily avoidable.